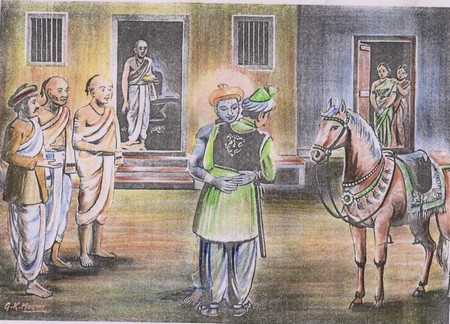 At Guruvanapur i.e. Gurlhosur, every body was very happy because of Shri. Chidambara Mahaswamiji’s stay. Once as usual Shri. Chidambara Mahaswamiji was busy in teaching disciples. Shri. Chidambar Mahaswamiji was telling about God who helps the good people, and he will rush always to the devotees also gives darshana. One student asked him, “How is it true?” . Can it be possible to have darshana of Lord Vishnu. Why not Mahaswami said, “Not only you but every body can have darshana if you want ". All students were surprised. Mahaswami further said, “I promise you, remember Shri Narayana all the while will come over here you will see him see him on the fifteenth day exactly from now.”