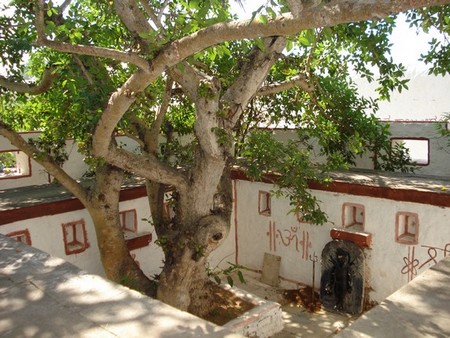 One day Shri, Martand Dixit completed all the anusthanas as per his daily schedule & sat in Vajrasana doing pranayama in front of his son Chidambara.

After some time, he stopped the prana ( breathing ) with help of yoga. It was the day, Jyeshtha Shuddha Navami ñ Shake 1788 i.e. 1698 A.D. Shri.Chidambara performed all the sanskaras of his father in Kengeri, under the Ashwath tree. As part of sanskara, on the third day, i.e. on Jyeshtha Shuddha Ekadashi, when he was collecting asthi (bones) and chita ñ bhasma, (when a dead body is burnt, it turns into ashes. The ash such formed is known as chita ñ bhasma), he saw six small audumbar plants sprouting under the hot ash. They had grown upto 2 ñ 3 inches.

Chidambara named them MATU-AUDUMBARA. A small wall was built around trees. Chidambara used to worship daily. One can see the tree even today in Kengeri. It is known as shang roop Kalpavriksha, as it is believed that it gives any thing, wished by its worshipper.

Shri.Chidambara performed all the sanskaras of his father as per vedic tradition and on the 14th day, many brahmins were invited for meal. When meals were ready, one of the disciple, Kashiraja asked Shri. Chidambara whether plates could be served for food? But Shri. Chidambara asked to wait. This happened 2-3 times. Meanwhile, 400 more Brahmins had arrived. Kashiraja was worried & he was not understanding the way to manage a lot of people with the limited preparation of meals. He told Chidambara that more food would be needed since lot of Brahmins had arrived. Chidambara said, ì Donít worry. My father was a great devotee of Lord Shiva. He has handed Annapurna to me. So the food will be sufficient to everybody. If you wish to see, come with me. Iíll show you.î ( Goddess of food, by the grace of whom, food is always limitless).

They both went to the kitchen. An old lady with Soubhagya- alankar (ornaments depicting her soubhagya) was standing in kitchen supervising and helping the work. On having darshan of Annapurna devi, Kashiraja was surprised and satisfied, with no doubts left in his mind, he returned along with Chidambara.

Everybody was served a good food & more than a thousand people dined on that day. Then Chidambaraswami offred donations, dakshina in the form of Gold and clothes to people.