Lord Vishnu for His devotees 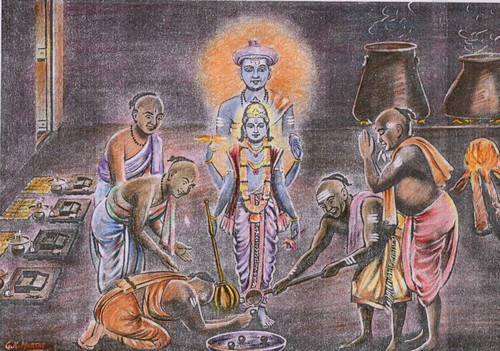 Accordingly Shri Chidambar Mahaswamiji called one of the disciple and told to arrange like wise as per the desire of these four persons. Next day on dwadashi ie the day on which the fast ends .The cook of the vaishnava was cooking the food .The four vaishnava devotees came after bath and started to perform the pooja . All the persons surprised to see that the SHALIGRAMS ie the form of vishnu puts for pooja ( perticularly by vaishnavas)are not available with other statues, idols of the gods .They tried to find them but nowhere they are available. During the time one of the disciple of Shri Chidambar Mahaswamiji came there and asked that whether your pooja is finished ?. And these people said no not yet , like wise after some time once again the disciple came there and asked about pooja completion and these people said no not yet mean while the time was running and it was 3.30 o clock noon, and the disciple of Shri Chidambar Mahaswamiji came once again and asked them about pooja and told that all others including Shri Chidambar Mahaswamiji has to take food yet and all are waiting. What is the problem? All are unhappily told that our gods have left us and we do not know where they are and with out them how we can perform pooja and naivedya.

Shri Chidambar Mahaswamiji use to give darshan as per the diety in the mind of the devotee. Also use to tell god is one, only the names are different and never try to differentiate them and also never say he is big he is small