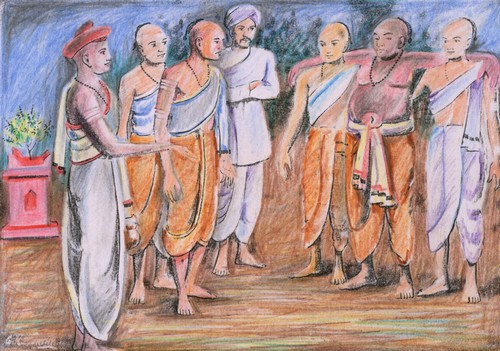 Once there was a mantrika ( magician with evil spirits ) who was famous for his bad attitude towards others. He learned to achieve many things with the help of mantras. Even he use to challenge to the gods. At the same time he was very cruel, arrogant to every body . His name was famous for cruelty . So he use to visit big peoples, saint and challenge them rather make the blackmailing so every body frighten with his name.

Once he visited Tirupati by seeing welness, richness, fame etc. There he asked lord Venkataramana to give him 6000 gold coins other wise I will steel your "aura ". Then he awaited for three days but got no money or gold coins recieved .

Then angreely Mantrika started the mantras as per his challenge to steel the" aura " of Lord Venkataramana . Slowly on the first day itself eight " auras" have been removed. At night lord Venkataramana came into the dream of the main archaka(preast) of the temple and told him that "the mantrika is very bad person who has got much energy with worshiping the allmighty which he is using for the bad things. It is better to give him 6000 gold coins and send him from here ". Next day the main archaka or poojari called upon the Mantrika and gave him 6000 gold coins . With this the Mantrika has become more fre.

The kindness of Shri Chidambar mahaswamiji is always like a true god, always excusing to the people who came to seek rescue