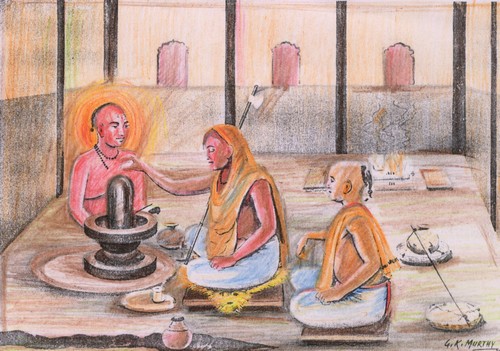 Once a yogi after his trip to kashi (banaras) returning with a water of Ganga in a kawadi( in ancient time the bags are used to take water with them). He was going towards Rameshwaram to pour the same on the Rameshwara as per hindu rituals. On the way one night he dreamt in which he saw Rameshwara who told him that do not go up to Rameshwaram I am in Gurlhosur near Savadatti in the name of Shri Chidambar Mahaswamiji. You may go to Gurlhosur. In the morning when the yogi wokeup, he rememberd the dream and enquierd about Shri Chidambar Mahaswamiji, some people told him that, yes we have heard, some people told as yes we have seen actual god. Latter on he thought of going to words Gurlhosur and stared towards along with his kawadi.