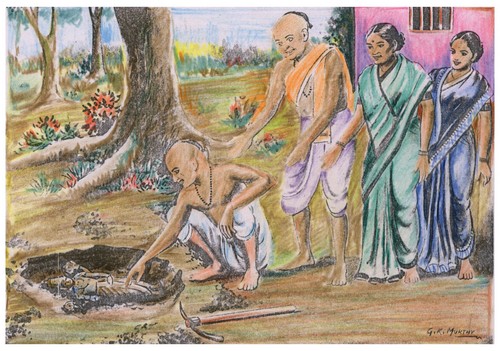 Once he was on the way to some other village for his personal work and mean time he was also hungry and so he sat under a tree to take his meal and after that he just became flat for a little while and unknowingly he got a sleep. After that when he got up and started his way he saw a deep jungle where cruel animals are seen running he was frightened, also crying slowly. At the same time he saw a Sheford along with his sheeps and Vishwanatha rushed towords him and also told all about. Both were walking in the jungle, meanwhile the sheford showed the people in group walking and told Vishwanath to join them and now you have no risk if you are in a group.Vishwanath done likewise and the group was going towards Guruvanapur for the darshana of Shri Chidambar Maha Swamiji. Vishwanatha has no choice than to continue. At last all of them reached Gurlhosur and took the darshana of Shri Chidambar Maha Swamiji .

While returning Vishwanath has supplied a hoarse and he returned to his home and digged out the place near the tree and checked. To his surprise he got a beautiful idol of Lord venkatesha, Vishwanatha took it and cleaned and made proper pooja etc and since then his entire life has changed. He use to live a happy life and he became a disciple of Shri Chidambar Maha Swamiji