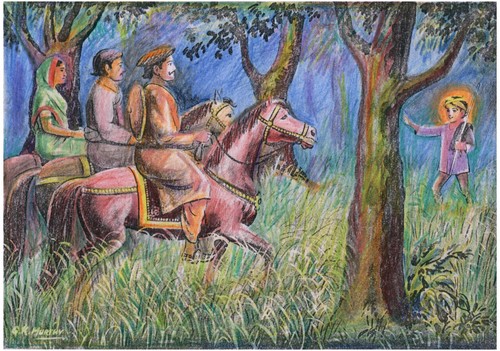 There is a small village on the banks of River Godavari near Vaijapr ( Aurangabad District in Maharashtra state ) named as Babulgaon. There a great saint Rajaram Maharaj took birth in a Rajput family. Since his childhood, he was enthusiastic and brilliant. One day in his school when he heard the story of Dhruva, he felt very sorry. “At the age of five, Dhruva got the salvation and darshana of the almighty God . I am 8 years old and I am nothing in front of him.” Since then he was in search of the almighty God. He was very eager to see the almighty and daily he was thinking the only thing through out the day and night. Mean while days and years passed. Rajaram became young.

One day a sadhu met him and told that he should not worry. He would get the darshana of ShriKrishna. After some days he went to Husengabad to see the king of that time where he was revered a Sardar of 500 horses but Rajaram was not happy with. During the time a Brahmin, Krishnabhatta who was planning to go to Kasi, came in contact with Rajaram. Krishnabhatta also told about Shri. Chidambara Mahaswamiji to Rajaram. On the same day Rajaram set for darshana of Shri. Chidambara Mahaswamiji along with his brother Nimbaji Kishnabhatta.

At night in a jungle they lost the way and entered into a deep jungle having large trees. They confused and little frightened with that new place. Shri. Chidambara Mahaswamiji came there in the incarnation of an eight year old child, having a stick in his hand and a shall on shoulder. These three people saw the little boy and come to him and asked him that who he was and why he was there in jungle at that time. The boy answered that he worked there to show the right path to those who lost their way in that jungle. He said, “Many people forget the way. You come with me. I will show the way.” For some time he walked with them showing the way. When they approached to a good road, he disappeared. That road approached to Kundagol village.

Shri. Chidambara Mahaswamiji enquired Rajaram what he wanted. Rajaram told he would ask it in a place where nobody was present. Shri. Chidambara Mahaswamiji took him in a room and asked him to be free from all doubts. He further said, “I know that you are the great disciple,” Rajaram said, “Mahaswamiji, Iwant nothing. I want devotion only.” And Shri. Chidambara Mahaswamiji showed him the vishwatmak roop of Lord Shrikrishna, so that all of his confusion was removed. With the darshana of Shrikrishna, Rajaram forgot his Self-being. He heard that there is no difference between Shiva and Vishnu. The nine dnyanagas i.e. vairagya in kama, indriya nigraha, tolerance of confusion (dwandwas), faith in the words of Guru, Ahankara tyaga, Dhruda Abhyas, Satsamagama, wining of prana,, vasanakshaya. After this the words of Guru only help you to attain salvation i.e. dnyana with moksha.