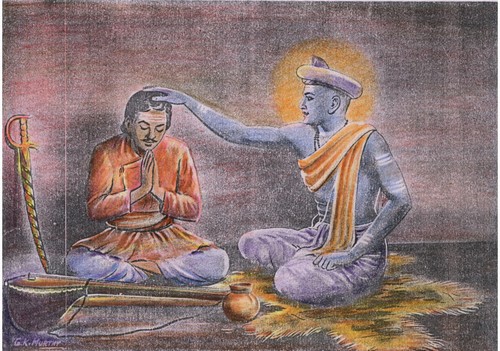 During that time due to the lightning light of the Shri Chidambar Mahaswamiji the eyes of Rajaram were closing all the time . Then Shri Chidambara Mahaswamiji took a simple Brahmin style and told to come for the darshana in the morning . At the same time Rajaram awakened from the sleep and remembered the dream. Rajaram even though he had not took the meal he felt like he has eaten fullstomach , also he felt that his mind was stable , peaceful , and calm . Then soon Rajaram fis\nished his morning duties and started for the darshana of Shri Chidambara Mahaswamiji

Shri Chidambara Mahaswamiji took him in a room and told that " leave all the doubts , I know that you are the great disciple ask as you want . Rajaram said that MAHASWAMIJI Iwant nothing except your bhakti (devotion) give me bhakti only . And soon Shri Chidambara Mahaswamiji changed his roopa bodystyle . Showed the darshana of Shri Krishna so that all of his confusions should be removed. Also the style of Lord Shiva .With the darshana of ShriKrishna as well as Lord Shankara , Rajaram forgot himself and he is rather became unconscious . Rajaraam experienced that there no difference between SIVA AND VISHNU.The 9 dnyanagas ie vairagya in kama, indriya nigraha ,tolerance of confusion (dwandwas) , faith in the words of Guru, Ahankara tyaga ,Dhruda Abhyas ,Satasamagama, wining of prana,,vasanakshaya after this the words of Guru only lead you to help to attain salvation ie DNYANA WITH MOKSHA.