Blessings to the widow 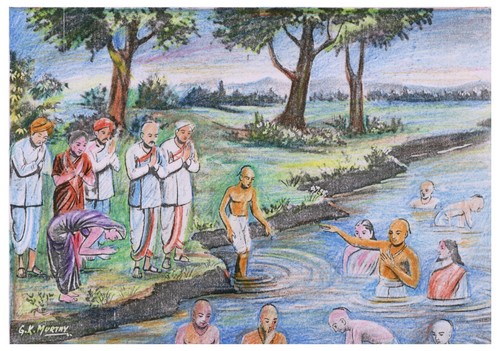 Shri chidambar Mahaswamiji called one brahmin and told him to perform the pooja of the holy river with the hands of the lady and every thing will be ok . Shri Chidambar Mahaswamiji went from there. Accordingly one of the brahmin started to perform the pooja with the hands of Narasubai . The brahmin asked her to go and get bath in to the holy Krishna river and come for the pooja. Narsubai went in to the holy river and dipped, a minute, two minutes gone , one hour lapsed but the lady has not came out of water. The brahmin and the nearby devotees who saw this have also frightened. Mean while a lady has seen coming out of water. The lady came toword the brahmin for the pooja. They asked her about. The lady repplied that she has gone with the " yakshyas" who were performing the pooja of lord Siva underneith the water I attended it and returned. So I was late to come out. Then she finished the pooja of holy river Krishna.To the surprise of every body a man like a sanyasi having long beard and mustaches arrived there to the place of pooja. The lady saw him keenly and surprised to see that he was her husband, who has left his house for teerth yatra long back. And about him only the news was received that he was dead and since then the lady use to live as a widow. But now she recognized him and welcomed him. Then the person also took holy bath.

Narasubai is from the village Yandigari, Joshi family. After Monambhatta the family of his next generation Gangadhar, Krishna, and presently Panduranga bhatta are livng there now.