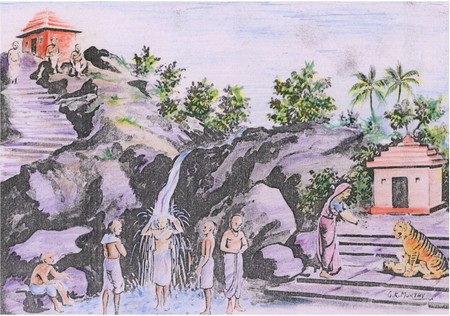 In a village named SOGAL four miles away from Murugod which is famous for Lord Someshwar temple. Once Shri Chidambar Mahaswamiji was there to perform pooja of Lord Someshwara on Shivaratri day along with many disciples .Some body were doing abhisheka, some were doing nrutya ie dance, some were doing japa ie chanting the name of god, some were singing the songs of god. Through out day and night the festval ( utsava ) was going on. At early morning all have gone to sleep where ever the place they got.

Some were slept under the tree. One lady had came for the festival with her child along with her father in law. She got up early and kept the baby near to her father in law (ie she slept the baby there) and went for the bath near the water fall .(thinking to complete the bath before gents get woke up ). She finished her bath and took darshana of Lord Someshwara and retuned back to the place where she slept the child.

The lady had frightened to see that one tiger has licking her child. She fall on the ground unconscious. When she came into consciousness with the help of other desciples gathered. She ran to words Shri Chidambar Mahaswamiji with crying to save her child. The other desciples there also surprised to see the tiger licking the baby. Shri Chidambar Mahaswamiji heard the news from her and told do not worry nothing will happen.

Shri Chidambar Mahaswamiji told her that "listen while going for the bath you thought that you were kept or slept your child near your father in law but due to non availability of light you slept the baby near the tiger which was sleeping under the tree to look after the baby. Do not worry now you go to the tiger and ask your child to him like you are being asking the same to your father in law. The tiger is good one he also came for the festival of Lord Shiva like you. Accordingly she went to the place near tiger. And told that, Oh my father in law I have given you my baby to look after while going for bath, please return me, my baby. The tiger heard the words and as if it understood the massage it took the baby slowly and returned to her juntly and then it ran away in to the jungle lifting its tail with joy.