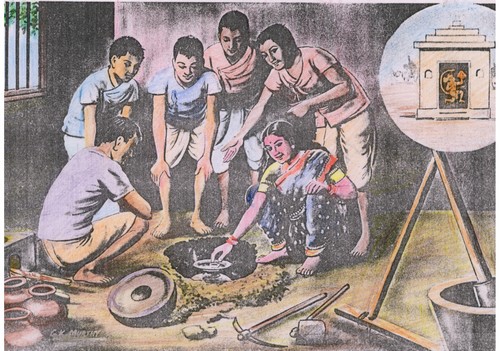 An oilman, named Ramkrishna was living in Vijayanagar village. He was veryrich. He and his wife used to help others. It was a very happy family. The only shortage was they did not have a child. The couple performed many anushthanas, worships as well as took medical aid available at that time. But nothing proved to be fruitful.

One night, a Brhmin appeared in dream of Ramkrishna’s wife. He said, “You and your husband should go to Murugod village for the darshian of Shri. Chidambar Mahaswamiji. He is actual living god. Devote yourself whole- heartedly as he is actually Lord Shiva. You will get whatever you want.”

Soon they started for Murugod for the darshana of Shri. Chidambar Mahaswamiji. Shri. Chidambar Mahaswamiji saw them coming towards him and understood the problem. He told them that because of their misdeeds in previous birth, they did not have a child in this birth. For that Ramkrishna asked the remedy. Shri. Chidambar Mahaswamiji said, ”About 4 KOSA i.e. 10 kms from here, the village named Sattigeri is situated . There is a house of an oil seller opposite to the Maruti Temple . Long back the oil seller living there was very reach and he used to give all the profit to his wife. She use to put them in to the big pot and in such a way, she gathered a huge amount of money and buried the pot deep in the earth and kept a big hollow stoneand a tray on it . She had five children. Neither the children nor her husband knew about the pot. One day suddenly she died. The oil business also slowly collapsed and the family reached to the most poor condition. The oil seller and his children searched for the money she had kept but they got nothing. Due to poverty after rich life, the family was losing their balance and they cursed her. You are that lady in previous birth who kept all money under the earth, leaving the family members in trouble. So now you go to the particular house and search for the pot in the north east corner. You will find a hollow stone. Remove it. Below that, a pot will be seen closed with a tray. You remove the tray and you will find a nose ring (NATH). You take the ring only and give all the rest of the money to the family members, who are your children only.”

Both Mrs. and Mr. Ramakrishna started for Sattigeri. Many people followed them to see the miracle from Murugod. They reached the house in front of Maruti Temple and told all about to the family members and requested them to co-operate. As the family was in miserable condition, they agreed immediately.They dug accordingly in the nort-east corner. to their surprise the saw a pot below the earth and at the mouth of pot, on the tray they got a nose ring. Mr. and Mrs. Ramkrishna took the ring and distributed the remaining money in the pot amongst all. The people present at that time surprised and gave slogan in praise of Shri. Chidambar Mahaswamiji.

Shri Chidambar Mahaswamiji always used to help others with no expectations. Also, he used to teach the same to his followers. He used to tell never leave others in miserable condition. If you come across such people, help them in whatever way you can.