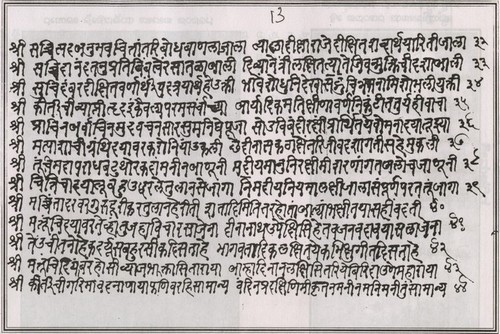 Sakharam Garde was one of the most dearest devotee of Shri. Chidambara Mahaswamiji. The Maharaja of Sangli had imprisoned him for investigation in a case. Garde felt very sorry as he had done nothing wrong, for which such a punishment he was facing. At last he convinced himself and thought that it was a good chance to worship or to meditate Shri Chidambar Mahaswamiji. During the time he was advised in dream by Shri. Chidambar Mahaswamiji to write abhangas ( devotional lyrics). But he did not have a paper to write. Garde made an ink from cow dung and water and the wall of prison as paper. He wrote many abhangas on God and Shri. Chidambara Mahaswamiji. the famous Shrimatcharitra about Shri Chidambar mahaswamiji is written in the prison itself. he is well known as Shri nana Garde

One day Shri Garde was writing the abhangas as usual. Shri Narayanswami arrived there and told about Shri. Chidambar Mahaswamiji and his massage that he would be released on the 16th day. Narayanswami advised him to go for darshana after release. After that Shri Narayan Yati went to Wadi. On the day before 16th day, Shri. Chidambara Mahaswamiji told to the Maharaja of Sangli in his dream that "One of my devotee Nana Garde is in your prison. You must release him immediately, otherwise you will be in trouble". On the next day morning, the king followed the instructions in his dream and ordered to release Shri Sakharam Garde. The officials of the prison came to Garde and told that, his enquiry is finished and he is free from today. But Sakharam Garde requested that he wanted to stay in prison for four more days so that he could get the abhangas copied on paper which he had written on the walls of prison. The officials told him to get permission from the king. So he requested the king. The king once again remembered the dream and allowed him to stay inside and arranged for the requirements of Shri Garde with respect. Garde got the writing material and within four days he copied all the abhangas from the wall. The abhangas are available now as "SHRI MATCHARITRA" which is comprised of 2500 abhangas.