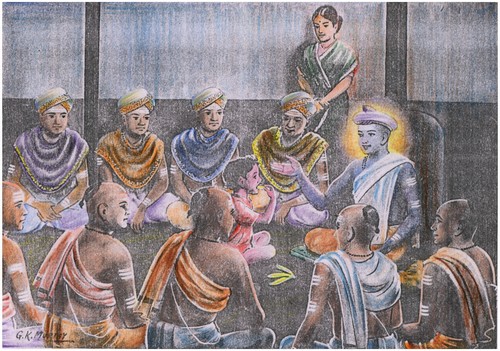 Since ancient days, Kashi i.e. Banaras is famous for hindu Scholars (pundits), most brilliant scholars live in Kashi. As the river Ganga and Lord Vishwanath dwell there, they give every thing to devotees. As the name of Shri. Chidambara Mahaswamiji reached to Kashi, some of the Brahmins could not tolerate it. They decided to do something. So some brilliant Brahmins who knew the entire vedas, shastras, puranas etc.were selected and sent towards Shri. Chidambara Mahaswamiji to deceive him.

A team of four brilliant scholars started their journey to Gurlhosur. One night during the travel they had a dream, in which they saw a Brahmin with a kalasha in his hand and a pagadi on head, told them that "why unnecessarily you have taken trouble to come to Gurlhosur? I am a simple Brahmin. I do not know the vedas and shastras etc. You would have blessed me from Kashi only". Every body had the same dream. They were surprised. Here at Gurlhosur Shri. Chidambara Mahaswamiji told to all devotees that some scholars from Kashi were coming to test him (or to deceive him). He told his devotees to be ready with arrangements.

The team arrived to Gurlhosur during night and stayed at one of the temple. After some time all of a suuden Shri. Chidambara Mahaswamiji stood in front of them and said, ďI am Chidambar, a simple Brahmin. You are actually vedamurties (idols of vedas). So I came for your darshana, please bless me.Ē The scholars said, ďOh! you are He. Ok. Whatever you may be, we will see you in front of all in the sabha (meeting). Where you will have to face us regarding vedas and if you are defeated, you will have to come with us leaving every thing here only.Ē Shri. Chidambara Mahaswamiji said, ďO.K . Lord Vishwanath will full fill your will also.Ē And left them.

Shri Chidambar Mahaswamiji never get angree even others make defame pr insult to him. all the time he is kind enough towords all