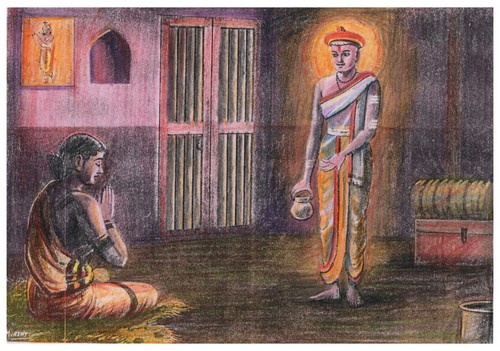 Soon they reached to their home he started quarling with his wife. With angreely he took a wapon and in a loud voice he was rushing towards his wife to kill. Mean while his wife remembered the half portion of the rice which Sri Chidambar maha swamiji has given a day before. Here at a kitchen she opened the cloth bundelled. To the surprice of her all the rice had become gold. At the same time her husband reached to herto kill. She showed the gold in a cloth. Also she told that it is the same rice we left half portion on that night. With this much of gold by selling this we can live years together. how can you say we have not cared and we got nothing from Shri Chidambar Mahaswamiji. Her husband could not understand any thing. He was surprised to see and fall down unconciously . When he woke up he was very much shameful to see his wife . He told to his wife that I am very very sorry for the mistakes committed about Lord shiva and Shaiva people. So be ready we will go to Shri Chidambar Mahaswamiji darshana and beg pardon.

Shri Chidambar mahaswamiji told them never differentiate between Lord shiva and Lord vishnu, it is the biggest sin you may worship one or both it is one and the same. Shri Chidambar Mahaswamiji blessed them and sent back