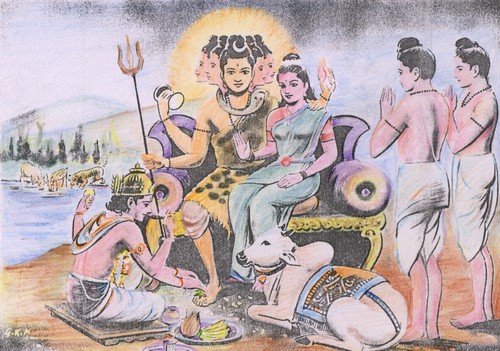 After seven days they came in jagruta-avastha ie out of meditation. Shri Chidambar Mahaswamiji told them to recall and say what they saw. They started to tell that "At early minutes we saw light every where then a big hill with seven colors with bright rays. The tree like Kalp vriksha, every where all animals wandering freely. There are many cows wandering . They saw golden lotus. Every thing was free. Near by that on a white quartz big crystal Lord Shankara was sitting with Parwatimaata. Around him many rishis are chanting vedas, other gods also are praising Lord Shiva. During the time Lord Vishnu came there and performed pooja of Lord shiva.

Then Lord Brahmadeva came and requested Lord Shiva that " on the earth the prabhava ie influence of Kali has dominated the truth and spiritual things, the devotees of the god are in trouble and facing many difficulties " Then Lord Shiva replied that I know and I will be there in the name of Chidambara to help the people. Any body who worship Chidambara will get what ever he want. During the Kaliyuga the names Chidambara or ShivChidambar are the easiest ways to pass the life." Then after some time all have came out of meditation. Then the old person alongwith both Samb and Sham told all about the rest of Kailash Darshana and prostrated in front of Shri Chidambar Mahaswamiji .