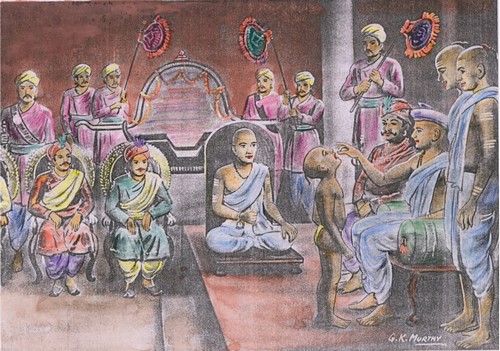 Once Shri Chidambar Mahaswamiji was at Shirahatti village where a well known scholar ie shatra pandit named Ghantarava came to see Shri Chidambar Mahaswamiji. He was called Ghantarava because he use to go to villages and cities and rings his Ghanta ie bell in his hand and call as a challenge to the scholars of that village to come over to him for the discussion of shastra, vedas, of course he was studied .And he use to defeat the brilliant people of the village and get a letter ie certificate like wise and proceed to next village.

The discussion was started as per ancient Sanskrit style. And Ghantarava to put poorva pakshya (starting base argument). Ghantarava started poorva pakshya but soon his body started trembling.He forgot to put repplies to uttar pakshya( latter argument for the earlier),also he forgot what was he was talking. Latter on he was talking hezardously with no connection and meaning in his sentence. All the people gathered are started to laugh. The troumbling of the body of Ghantarav also went increasing. Ghantarav has not understand what to do?. At last Ghantarava accepted his defeat and came towards Shri Chidambar Mahaswamiji and prostrated and told. I am sorry I had committed a great mistake by not listening to you in the evil mood of certificates. The dumb boy you have choosen and sent for discussion had defeated me. You are not a man. Please excuse me , I will never commit such mistake and tease to anybody from today with the power of knowledge. Shri Chidambar Mahaswamiji is always kind enough and excused Ghantarav. Shri chidambar mahaswamiji told Mr Ghantarav that never be egoistic no body in the world is complete, knowledge and study are for the well being of self and others which should be distributed and used for the good purpose only, thinking that its gods gift and one should use it for the gods work. Ghantarav ashamed of his past works and promised to Shri Chidambar mahaswamiji to leave the habit of him from now onwords.