Punishing the bad one 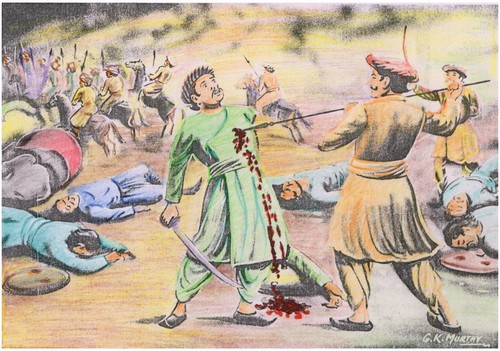 These are the quotes from ‘Gita’, where Lord Krishna says to his disciple Arjun that whenever the society will deviate from its principles, the Lord himself will appear to protect the society and religion, to abstain it from going the wrong way. In the following story from the life of Shri Chidambar Mahaswmiji, one can experience the same.

By the grace of guru, Dhondi became the chief in Tipu’s army. He fought against the Huns and defeated the Huns. Dhondopant Gokhale was in the army of Huns. In a war, they both had a combat with each other. Dhondopant was killed by Dhondi.

Bapu, the son of Dhondopant, attacked Dhondi in order to take revenge. On seeing Bapu’s battalion, Dhondi was frightened and ran away. He jumped in the river Krishna remembering Shri Chidambar Mahaswmiji and reached to other bank of river. Till then Bapu had reached there. Bapu pronounced Chidambar’s name loudly. Hearing this, Dhondi was pleased. A furious battle took place between the two. Bapu beheaded Dhondi. Dhondi left this world cheering Chidambar’s name.