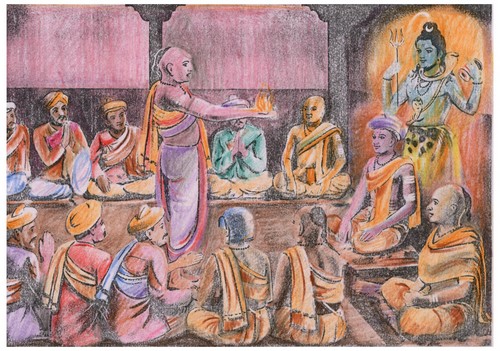 In a city named Machalipatnam near Madras, a Sanskrit scholar called Shivshastri was living. He was a great devotee of Lord Shiva. He believed deeply that every thing in the world is from lord Shiva only. So he was not worshipping any god other than Lord Shiva. Once he had been at Gokarna for the darshana of Lord Shiva, where he met a great sanyasi who gave him a sphatika linga ( Shiva linga of quartz) and told him to worship daily so that he could have Darshana of Lord Shiva. Then Shivshastri worshiped the sphatika linga with devotion and love.

After some days, Shivshastri heard that at Guruvanapur(Gurlhosur) Lord Shiva is living in the name of Shri Chidambar Mahaswamiji. ShivShastri thought, it is not possible in Kaliyuga. Illiterate people say lord to any. Is it possible to come the actual god on earth?”. On that day in the night, he saw in his dream the sanyasi at Gokarna who had asked to worship the lingam and told that it is true that actual lord Siva is living in the name of Shri Chidambar Mahaswamiji and you may meet the actual Shiva there at. In the morning he remembered the dream and the thinking al the way about the dream. Also thinking whether to go to Gurl-hosur. And thought that why he should not go and see the actual fact. Accordingly he started for Guruvanpur.

During the period at one night he halted in a temple which he had seen in his dream and where the Lord Shiva and Parwati were present, who asked him in the dream, “Shastriji, why are you going to Gurlhosur? Is it possible to come the actual god on earth?” In the morning Shastri remembered the dream and his desire of visiting Guruvanapur increased. At last he reached Gurlhosur. At that time Shri. Chidambara Mahaswamiji was sitting with disciples for pravachana. Shivashastri entered the hall. Shri. Chidambara Mahaswamiji said to Shastriji, “Oh Shaastriji, how is it possible to come actual god on earth? " Shivashastri surprised and saw towords Mahaswamiji. To his eyes Shri. Chidambara Mahaswamiji was looking like Lord Shiva with Parvati who met him in the dream. Shastriji was frightened a little and started to say " VABHUVA BHOOMAU PARAMESHWARA ASOU CHIDAMBARAKHYAH SA SHIVO AVATEERNAHA". On listening to this Mahaswami said, “ Shastriji, why you are praising a human being?” Is it possible to come the actual god on earth?”Then Shivashastri took a camphor in his hand and said, “I am lighting this camphor in my hand for your prayer (arati). If I am doing arati of a human being, my hand will burn and if I am doing arati of Lord Shiva, nothing will happen”. And Shivshastri started to chant shlokas in Sanskrit with burning camphor in his hand and doing arti. To his surprise, Shri. Chidambar Mahaswamiji was looking like Lord Shiva during the arti, and the palm of his hand was not burnt at all.