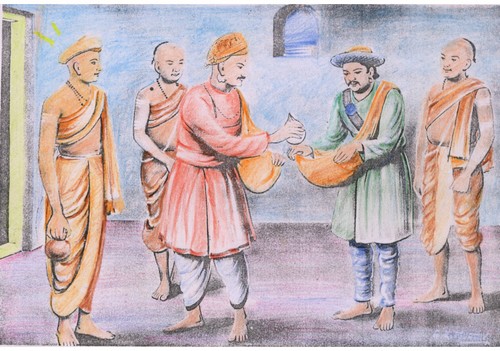 Shri Chidambara Mahaswamiji told him "Oh king listen carefully that I am giving you mantrakshatas and sriphala which are more holly and more precious for you as well as for the country men, after accepting them you only should take them upto your palace or home. Then Shri Chidambara Mahaswamiji closed his eyes with whispering some Mantras gave Sri Phala and Mantrkashata to Bajirao Pashave. The king accepted but handed over them to the servant near by standing to Peshwa. To see the situation the eyes of Shri Chidambar Mahaswamiji become wet, tears dropped down. These were the drops of patriotism which the king understood lateron

Shri Chidambara Mahaswamiji told "Oh king you have handed over your everything to the servant, its not only your bad luck but also of the nation. You have not taken the caution.The king didn’t understood the meaning and returned to Sondur. Shri Chidambara Mahaswamiji told that the days to come are very difficult abrahamnya days are waiting.Later on the British rule came into India in a fulsome.

During the time at Navalgund the marriage of Shri Mrutyunjaya with Kum Mhalasa the daughter of Shri Bapu businessman at Pune. And Wararuchi 's marriage with Kum Rama, daughter of Mayaral (Mairal) Naik from Kolhapur was also over .