Bad intentions of a devotee 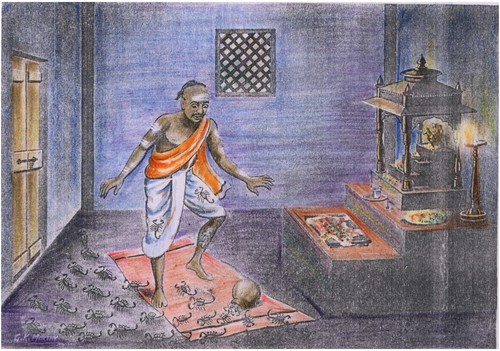 Shri. Chidambara Mahaswamiji was becoming famous day by day. People who were coming for Darshana were experiencing the fulfilment of their desires. Shri. Chidambar Mahaswamiji being the kind hearted, everybody was getting something.

One day Shri. Chidambara Mahaswamiji left the æKalashÆ in GodÆs room and went to river for a bath. The Brahmin thought, it was a right time to steal the pot and run away from the place. So he rushed there and took the pot. Put it on the cloth to cover it up. As he started to bind it by the cloth, suddenly a number of scorpions started oozing out of the pot. The scorpions continued to come out in hundreds and started moving in such a way that the Brahmin could not move from the place to get out of the room. He was much frightened.

Shri. Chidambara Mahaswamiji asked him to get up. Gave him 2 handful of money and said, ōTake this and go. You will not experience poverty through-out your life in futureö. The Brahmin again asked to pardon him and went to his village.