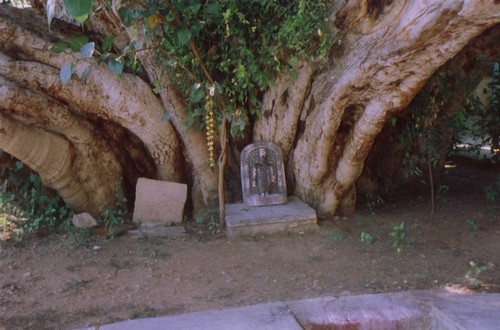 Gonnagar is in Belgaum district under Ramdurg taluka. It is very near to Soreban village wich is on state highway . It is also called as Go - Nagar . The famous Badami of Banashankari also very nearer to Gonnagar . Exactly two hundred years back on shake 1729 in Chaitra (1807 A D) the great second somagya was performed by Shri Chdambara Mahaswamiji (The first somayaga was performed by Dharmaraja with the help of Sri.Krishana ) . On banks of river Malaprabha a big place is avalable with many trees for shadow is available till today . The great saint Shri Paramacharyaji of Kanchi have established Shrichakra here . It might be a holy place in ancient days then only Shri Chdambara Mahaswamiji had sellected for yadnya purpose. It is the place where lacs of brahmins took prasada or meals , it is the place where number of saints lived during the yadnya, it is the place where the gods from heaven arrived for somayaga

It is the place where in eight days around 31 lacs of people in the year 1807 A D took meals as prasada of yadnya . The programme to remember the 200th year of the Somayaga a big celebration with all four yadnyas plus shuklayajurvediya yadnya was performed from 22/03/2007 to 24/03/2007 under the kind guidence of Shri Sundaresh Bapu Dixit of Gurlhosur Sansthan

The audumbar tree underwhich yadnya was performed is still avalable . It had with 8 branches in 8 directions