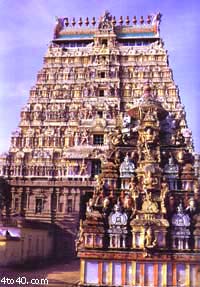 It is a biggest temple of Lord Shiva on earth. It is situated 150 kms away from Madras .The earlier name was Vyaghrapur situated on the banks of river Kolum. The place was in a large jungle where wild animals use to live particularly Tigers , so the place was called Vaghra-pur. A Shiva temple is near by it in the area of 40 squere acre. This temple is built in the earli days of 10 th century. It has five parts that is Chit Sabha , Kanak Sabha ,Nritya Sabha , Deva Sabha ,Raja Sabha .Near Raja Sabha Shivaganga teerth is there . There is a Shivalinga in Chit Sabha called Akash Linga .

It also welknown as a centre of Akash Tatwa out of five other mahabhootas or five basic elements.

There is a Siddhivinayak temple also there built very beautifuly. There is a statue of Natraja at nritrya sabha . The pooja etc are performed with the Manaka and the golden bhogamoorti . The water of Shivaganga teerth is used for pooja .Utsavam festval is performed at Deva sabha .Totally there are one thousand one thausand pillers (40*25). With four enterences and a gopur on them. As per order of Mallaiyya of Devara Hippargi Sri.Martand Dikshit came here to worship god shiva.