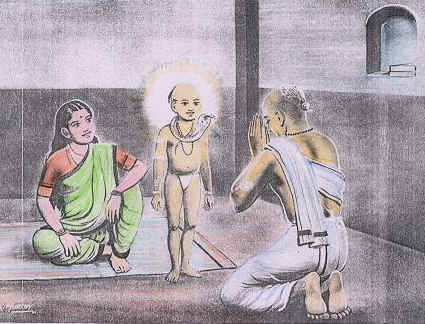 With the blessings of Lord Shankar at Akash Chidambar, Martand Dikshit and Laxmibai both went to the holy place Sogal near Muragod. They performed Gayatri Purascharana thrice before Lord Someshwara. Laxmi mata helped Martand Dikshit as usual in this spiritual endevour. Upon completion they proceeded to visit Devar Hippargi for the darshana of their kuladevata (family-deity) and sought blessings of Martand Bhairava.

When asleep that night, Martand Bhairava gave them darshana as Waghya (Lord Shankara gives this privilege to only sacred souls) and gave a boon of one more child by the grace of the Sun god. The lord then asked them to name this child as a Prabhakara . He also assured him of many grandchildren thereafter.

Being blessed by Martand Bhairava the couple returned home to Muragod. They were busy with daily chores spending most of their time in contemplation. In a few days Laxmi Mata become pregnant her face glowed like a moon with divine beauty with every passing day. She carried no desires as other pregnant woman generally do. She spent much of her time in deep meditation, and listening to the preachings of Advaita and Vedanta.After hearing the news of his wife being pregnant, Martand began to give careful attention to his wife as he definitely knew that Lord Shankara was in her womb. When Laxmi Mata gave birth to a male child in the tenth month, the entire labour room was brightened. At the age of eight, the child grew up to become a bright boy having bilva and akshata in the right ear and rudraksha garland (gajacharma) around his neck like Lord Shankara. The parents prayed at the holy feet of Lord Shankara requesting him to revert the boy to normal being so that they could give derive the pleasure of rearing, nursing and enjoying his childhood. They recollected the dwaapaar yuga when Lord Shri Krishna was brought up by Nanda and Yashodha and thought that their wishes were fulfilled.

This birth was on the auspicious day of Kartik Vadya Shashti, Monday 9.55 am at Makar lagna, Amsh 01 Karka ras, Pushya nakshatra, Shake 1680, (20/11/1758) Bahudhanya nama samwatsara. People from every village rushed to Martand Dikshit’s house to have a glimse of the newborn. Many astrologers drew horoscopes of the newborn to be the best as all the planetary positions were splendid. Many prophesied that the child would become a great saint and a benefactor to mankind. Some predicted that he would be the master (guru) of the whole world.

The parents were greatly pleased to hear the predictions. Sweets were distributed everywhere and the village wore a festive look. Religious rites were performed on the 12th day as per the instructions of Swami Martand Dikshit. The child was named "CHIDAMBAR" at the naming ceremony and the attending brahmins were fed sumptouously with delicacies. Brahmins and purhoits were honoured with gifts while children were beautifully cradled and the event was blessed and enjoyed by all.