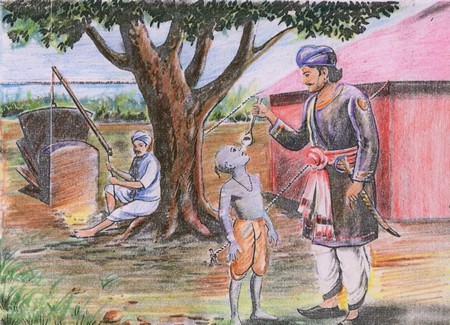 There lived a king named Prithweepati of the Pallava dynasty in the area of the modern-day Tamilanad . He was a very noble and benevolent king who took care of the people of the kingdom at that time. Once he fell seriously ill. A foul smell was emanating from his body. All types of doctors attended on him but in vain. Prithweepati was an avid devotee of Lord Shankara. He prayed in vain to the Lord to extricate him from this serious illness. Frustrated, he finally decided to leave his kingdom and go to Rameshwaram to seek the Lord or else die.

On the way to Rameshwaram, the king was very much tired and he stopped for a rest under an audumbara tree. There was a stagnant water ditch which was dirty and stinking by the wayside at a distance from him. When the king noticed this stagnant water, he saw that a dirty old pig came over and started wallowing in the dirty water after drinking. To his utter disbelief, he found the skin of the pig started to glitter like gold after it came out of the water. King Prithweepati wondered if he could get rid of his illness in a similar way. He tried the steps followed by the pig and also wallowed in the water like the pig did. His happiness knew no bounds when he realized that his illness had vanished and his skin too started glittering like gold, hale and healthy. The king wondered that the water in that area might be having some magical effect.

The radiant looking healthy king returned back and took reigns of the kingdom. He developed an affinity for the area since he got rid of an incurable disease. He took his armymen to the place where he experienced the transformation. He began to clean up the whole area including the water there. While excavating the area for water, his men came across a temple without any God inside. There were some notes in sanskrit and also there were many halls named after Indra, Brahma, Vishnu, shiva and Parvati Nrutya sabhas. It was later found that it was a place of Akashalinga. So it was a Akasha-Chidambara. Since then the king was known as Suvarna Chakravarti. The place came to be called as Chidambara Kshetra.

The king thought of installing a statue of God as there was no idol in the excavated temple. He decided to install a statue of Lord Shankara in gold and began preparations in that direction. The king ordered his ministers accordingly and also took lead himself. They started the work by liquefying gold in a big earthen pot known as mooshi. (Mooshi is the only pot made of mud in which gold can be liquefied.) When the gold was liquefied, the mooshi broke and the king was surprised. They repeated the same twice, but the mooshi broke. Every time the king tried to liquefy the gold, the mooshi broke. This recurred for 99 times and the king was finally distraught with it. Distressed, the king went to sleep with a vow to end his life in the mooshi itself in case the mooshi broke for the 100th time the next morning.

That night, Lord Shankara appeared in the king’s dream and reassured him that the statue will be formed the next time. For that, he asked the king to give audience to a Batu (dwija-kumara) who would appear at the place of liquefaction of the gold and just comply with whatever he asks for. The Lord then disappeared.

The next morning, the king along with his team started the liquefying process once again. It was precisely during the time of pouring the liquefied gold that a Batu appeared at the doorstep asking for alms.(Bhauti-bhikshan-dehi). The king recollected his dream and the Lord’s order. He asked the Batu to come inside so that he could give him whatever he demanded. The Batu, with fingers on his lips, gesticulated the king to keep silent and follow his instructions. The king readily agreed to this and asked what he wanted. The Batu asked the king to pour whatever he held in his hand. The astonished king was hesitant to pour the hot liquefied gold held in his hand. But the Batu insisted that he would do exactly what he was asked that is, to pour the liquefied gold. The king came towards Batu with the liquefied gold held by him in his hand and asked where to pour. To his utter surprise, the Batu opened his mouth where the king poured all the hot and sizzling liquefied gold into it. And behold! The golden statue of Lord Shankara was formed which is the present “Nataraja” idol in his dancing pose. This statue of Nataraja was then installed as per the wish of the king at the temple. Since then the king started worshiping the statue. The renovation of the entire temple was made by the king. The king came to be known as Suwarna Chakrawarti since then.