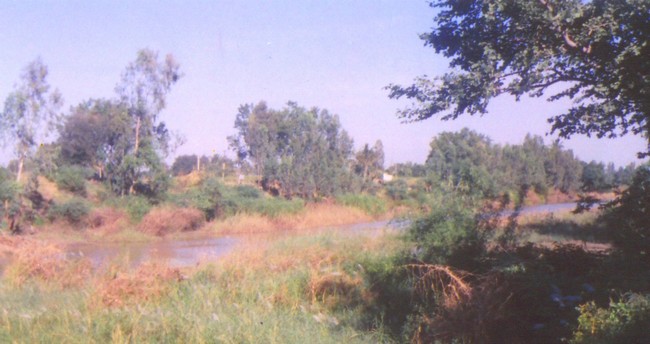 On the third day, all the Rutvijas (Brahmins) assembled at yadnya mantapam (pandal of altar) for carrying out their religious duties. They were busy preparing various things for lighting up the holy fire in the altar. When Shri Chidambar Mahaswamiji arrived there, they recited the pravargya charana (poetic lines) from the ancient Sanskrit scriptures. After this the sama gana (spiritual songs of Sama Veda) was also sung by them. The mantras were also chanted. Tens of thousands of people were the witness to that religious event. After this all the Brahmin priests went for their sandhya vandana (evening prayers). Then for the meal or prasada to their designated spots.

As the prasada or the holy meal was being prepared, a fatal accident took place. One of the cooks named as Nana Deshpande from Karadigudda village, accidentally fell into the big hot cauldron of the cooked vegetable. Because of the steam and heat inside it, his whole body was severely scalded. It sustained severe burns all over. When this reported to Shri Chidambar Mahaswamiji, he immediately got up and went to the kitchen. He looked at the unfortunate cook and smiled at him assuredly. He took out some holy water from a jug in his hand and sprinkled it upon his body. He asked the other cooks to apply honey to the burns on his body and lay him on the leaves of the banana tree. He assured them all that the cook would be fine and there was no danger to his life. Then he asked them to serve the meals (prasada) to all the invitees. It was due to the great spiritual powers of Shri Chidambar Mahaswamiji that the burnt cook’s health quickly improved and he began to feel better. The progeny or descendents of Nana Deshpande can be found even today in Karadigudda. The descendent known as Shri. Hanumantrao Deshpande and his family are the residents of the Karadigudda village. He is the member of the latest generation of that family. Since the accident of their ancestor i.e. Shri. Nana Deshpande, all the generations of the family have abstained from cooking eating that particular south Indian (especially of Karnataka) variety of vegetable / pumpkin till date.

Since it was a kind of the choicest meals (Ichcha Bhojana), every body could ask for the food of his choice. Shri Chidambar Mahaswamiji appealed to the people in every row to eat the food to their fullest satisfaction. The food had an unprecedented flavour and taste. After the prasada, they were given the monetary gift (dakshina) according to their respective rank and position in the hierarchy. They were also given pack of green betel leaves and nuts. Around Eighty thousand people including kings, queens, royal family members, soldiers and other dignitaries enjoyed the delicious prasada on the third day.

On the 4th day, Chaitra shudhdha ashtami (Eighth moon) Shri Chidambar Mahaswamiji and the Brahmin priests arrived at the yadyna mantapam as per scheduled time. It was the day of the ritual Agnistomiya. It began with pravargyotthana, and the agnipranayana and then agnisthoma rite were performed. By the noon, after religious activities were over and everybody went for sandhya vandana and then for the prasada. In the mean time, Shri. Diwakar Dixit found that a very little ghee had been left with them and there was an urgent need for some more stocks. He informed Shri Chidambar Mahaswamiji about it. However, Shri Chidambar Mahaswamiji asked him to not to worry about it, though the man sent by them to bring stocks of ghee had not returned yet. He also assured him that their ceremony would not be affected in any way and that every thing would be fine. Shri Chidambar Mahaswamiji asked Shri. Diwakar to bring pots of water from the river Malaprabha. He also asked him to bring as much water as the quantity of ghee needed for the purpose. Accordingly water was brought in pots and put before Shri Chidambar Mahaswamiji. He then looked at those pots of water and closed his eyes for a moment and then asked Shri. Diwakar to take away those pots. Shri. Diwakar along with the people were surprised to find that the water was transformed into ghee. The same ghee was served and also food was cooked with it. It had a healing medicinal effect on their bodies. Those who ate the food found that their skin had changed. They had got rid of a number of diseases and illnesses. Every body ate to his fullest satisfaction. After the meals the Brahmins were given monetary gifts and a pack of betel leaves with nuts. Around three lakh sixty thousand people including Brahmin priests, hermits, Ninety four thousand Eight hundred soldiers, kings, queens and other dignitaries took the meals. In the mean time, the persons who had gone to collect ghee from various villages brought the pots of ghee, but Shri Chidambar Mahaswamiji asked them to return the ghee to the river Malaprabha, as it had been borrowed from the Malaprabha. Accordingly Sri Diwakar Dikshit and other cooks poured the ghee into the river Malaprabha.

At evening a number of entertainment and spiritual activities and classical programmes were organised. The people enjoyed the same till late at night.

The fifth day of yadnya began with sutya karma (a ritual). Everybody was there since the early hours of the morning. It was a convention that after the sutya karma, the prathasthavan (hymns) was sung. It was sung in a low voice, but people assembled there heard some noise and sound coming from the sky, but they could not identify its source. Some holy minded persons like Raja Ram Maharaj realised that the noise was emanating from heaven. All gods were making haste to descend upon the earth to reach the place of yadyna. They were hastily drinking the soma (a heavenly wine extracted from plant Soma). After Gods finished their part it was the turn of Brahmins to drink the remaining Soma. The Brahmins first accomplished their incantation mantras of Somayaga and then drank it. Some of them performed the Madhyanhasawan and the Dakshina homa(a lighting up fire in altar). After this Shri Chidambar Mahaswamiji worshipped rutwijas, Brahmins. He gave them silk cloth, money, gold, young calves, cows to every one of them except Kali. Every body was satisfied with them. After this the prasada (holy meals) were served to ninety six thousand Brahmins, kings, queens, soldiers and others. At night some entertainment programs like classical dance and music were organised. Every body enjoyed it till late night.