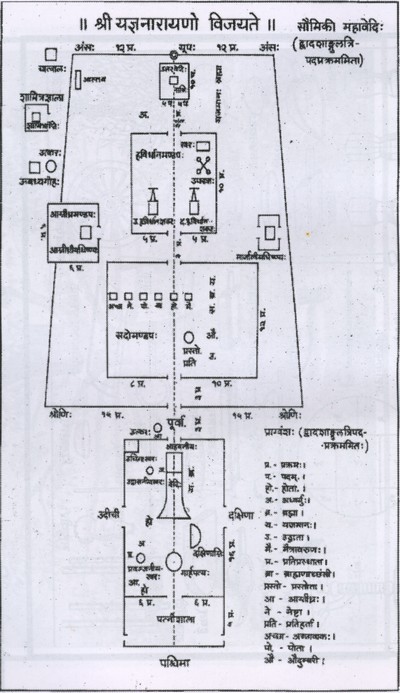 After some time Shri. Diwakar Dixit arrived there from Gurlhosur and prostrated at the feet of Shri. Chidambar Mahaswamiji. He enquired him about the plight of people. Shri. Diwakar told him that every thing was quite well due to the discourse or sermon on Shri Madbhagawat. It was started by a certain devout Brahmin. He also told that it had given the draught affected people a great respite from there carking cares and corroding anxieties. Shri. Diwakar informed that on the last day of his sermon, the Brahmin had told the gathering that Dhrmaraja during the Mahabharata era had performed a rajasuya yadnya. ( A ritual of Holy fire at altar), also known as Somayaga to liberate the people from the burdon of their sins and invite the rain God to bestow upon people, prosperity and peace. After that no one had ever tried to replicate Dharmaraj'a efforts. By saying this, Diwakar persuaded Shri. Chidambar Mahaswamiji to favour people of his area by performing Somayaga of the scale so the people may get great relief. Diwakar was very lavish in his praise of Shri. Chidambar Mahaswamiji and was amused by his innocence. He made it clear that Dharmaraja was able to perform the Somayaga because he was blessed by Lord Shrikrishna in his endeavour. However he himself was a simple Brahmin and could not be compared with Dharmaraja and that it was hardly possible for human beings to perform such an act. Shri. Chidambar Mahaswamiji also remarked that in Dwaparyuga (Dwapar era). Lord Krishna had performed it on an epic scale, but in Kaliyaga (Present era) it could not be performed. However, Diwakar could do it on a small scale. Lord Krishna did it because he is both the creator and the creation itself. He was endowed with divine powers to control the whole universe. But the mortal human beings in Kaliyaga would not be able to emulate his example. Even after hearing this piece of advice, Diwakar Dixit was still unconvinced. However, Vishwambhar Gohkale and others who accompanied Diwakar opined that if Shri. Chidambar Mahaswamiji wished and willed it then nothing was impossible in the world. He expressed a hope that Shri. Chidambar Mahaswamiji might agree to their request for the sake of people’s welfare. The people gathered there also prayed to Shri. Chidambar Mahaswamiji to bless them with his consent. Shri. Chidambar Mahaswamiji moved by their earnest request and finally agreed to help them organise the Somayaga.