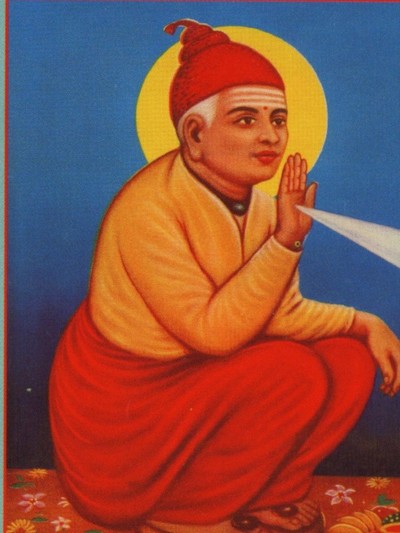 The next day, it was the auspicious period of Chaitra Shuddha Shashthi (Sixth moon) according to the Hindu calendar or almanac. After the routine chores Shri Chidambar Mahaswamiji arrived at the yagya mantapa. He had put on the white clothes and smeared his body the bhasma or ashes. There was ceremonial spectre or staff in his hand. He prostrated to the Yadnyeshwara (God of altar) and then went to the rutwijas or main Brahmin priests who were busy completing their assigned samkriyakarma (a ritual). Then the pravargya (a ritual) was started. After this the two brahmins arrived with swatadwarya gharms in their hands and poured into the holy fire as ajapa and a colourful fire was lit up. After this the rutwijas took the remaining garmayaga and were satisfied with it. By the twelve of that noon, Shri. Shankar Dixit paid tributes to all the brahmins and rutwijas with utmost respect and devotion. He prayed them to take prasada or ceremonial delicious food. After the meals every Brahmin was given some amount of money (Dakshina) a pack of betel leaves and nuts (tambool) as was the practice. About two hundred thousand people from the adjoining villages, soldiers, brahmins and those who were engaged in serving the prasada and other works were fed on the occasion.

Here at the village Garag, Shri. Madiwalappa, his disciples and friends were talking about the yadnya and related activates happening at Gannagar. Shri. Madiwalappa used to fondly call Shri Chidambar Mahaswamiji as “Appa”. His friends taunted Madiwalappa that though he had deep faith in Shri Chidambar Mahaswamiji and though he called him Appa, it was quite disappointing that his Appa has forgotten him to invite for the historic Somayaga. They kept wondering as to why Madiwalappa was not invited for the ceremony. He used to convince them his swamiji (Appa) would never forget him. As they were lost in this discussion, Shri. Diwakar Dixit and his colleagues came there riding on horses and elephants along with palanquin. Shri. Diwakar Dixit got down and prostrated at the feet of Madiwalappa. After exchanging courtesies, Diwakar Dixit conveyed to Madiwalappa, Shri Chidambar Mahaswamiji’s invitation to Gonnagar. Madiwalappa’s disciples and friends were highly impressed with great relationship between Madiwalappa and his Appa. Madiwalappa gladly accepted the invitation. He requested Mr. Diwakar Dixit and his entourage to proceed and told him that he would follow them soon. He also convinced him that he would not require either an elephant or a palanquin. Thus Mr. Dixit and his men returned to Gonnagar, but Shri. Madiwalappa reached the place through air before them.

The Kittur sansthan (the princely state of Kittur) had profound faith in Shri. Madiwalappa’s spiritual prowess. They continued to repose their faith in his disciple Shri. Sidhdharudh swami.

In the evening, various rite related to the evening prayers such as, the sayam pravarghya, sandhya were accomplished. The devotees had thronged near the dais and they touched his feet out of sheer reverence and devotion and sought his blessings. At a little distance from the podium, the priests were reciting the verses from the holy scriptures (the puranas). Some of them were busy delivering sermons (pravachanas) to the congregation of the devotees. They were also chanting the Vedic hymns in that calm and quite atmosphere.