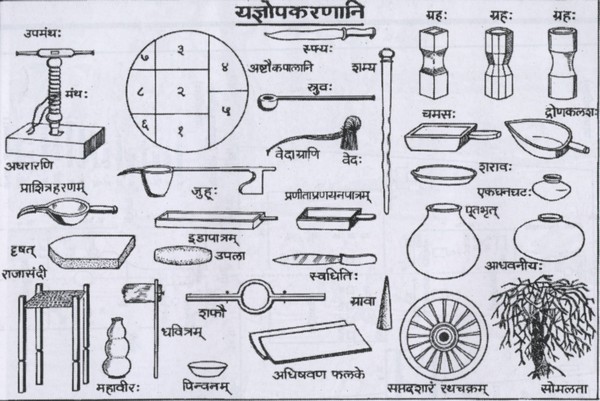 The great Somayaga was performed on the earth only twice. The first time by Dharmaraja in Dwaparyuga with the Blessings of Lord Shri Krishna. Since then there were so many powerful kings, incarnations, saints on earth but none of them dared to perform the Somayaga. The second one in Kaliyuga by Shri Chidambar Mahaswamiji during the 1807 A.D. or ( Shake 1729 ) in Prabhav nam Sanvatsara Chaitra shuddha Panchami Monday Mriga nakshatra, balav karana, Shobhana yoga, guru-chandra shubhayoga.

On the first day everybody awoke at auspicious time of brahma muhoorta ie early in the morning and after complition of nitya karmas (routine duties), Vedadnyas, Rishisadrushya brahmanas, the kings quenes, and all devotees gathered. Then Sau Saraswati Sau Savitri both the wives along with Shri Chidambar Mhaswamiji bowed in front of Shri Martand Bhairav ie Kuladevata of Shri Chidamar Mahaswamiji and made sankalpa (resolution) of the Somayaga. Then they worshipped Lord Ganesha, the first of all Gods and then the recitation of divine verses was also performed. Then Shri Chidamar Mahaswamiji requested the main 16 brahmins to come over there. They were adhvarya, hota, brahma, agnidha those were main four types of brhmins in addition to pratipasthata, somapravaka, achvaka, vaitravaruna, vesta, pota, udgata, prastauta, pratihata, brahmanadwarisi, unneta, subramanya as deputy brahmins for yadnya.

The sixteen rutvijas came there. Shri Chidamar Mahaswamiji performed the rites of bathing the feet with holy water and worshipping them. He anointed them with vermillion, sandalwood paste, rice gains and decorated them with sweet smelling flowers. It was followed by the worship called Madhuparka Pooja with due seriousness and devotion. After this the actual ritual of yadnyakarma or rites had to be started. During this whole religious and spiritual exercise, Shri Chidambar Mahaswamiji looked like an incarnation or avatar of Lord Mahadeva in human form. There was a white cloth around his body. As a part of religious convention he had smeared his body with the white powder (bhasma). Te worshippers of Lord mahadeva or shiva usually put marks on their forehead, arms, neck etc. with white powder symbolising their readiness to shun their worldly persuits and their deep devotion to shiva who is believed to be residing in the grave yard. Shri Chidamar Mahaswamiji had also worn a garland of rudraksha(dried fruit with various groves on their surface. The trees are found in Himalayan mountain ranges.) There was a pot of holy water in the hands of Shri Chidamar Mahaswamiji. He was being followed by his wives saraswati, savitri and children. As they were circling around the holy altar amids the chants of the Vedic hymns and various verses from the ancient hindu scriptures of the darmashastra and shruti. As they were walking slowly, they were being observed by the then great kings, their queens and special soldiers who had assembled there to witness such a mega religious event. The whole ambience was enlivened by the equally divine musical notes created by the musicians on their instruments. Their echoes were heard in coming from almost all the ten directions. Out of that thunder gods in heaven and on the earth might have descended the resonance of divine sound of “OM”. People standing on both sides of road had that rare spectacle of the procession led by Shri Chidamar Mahaswamiji whose blissful glance gladdened all of them. As Shri Chidamar Mahaswamiji and his followers reached the pandal of altar, the married women poured water brought from seven holy rivers on the feet of Shri Chidamar Mahaswamiji. After this auspicious welcome, he entered the interior part of the yadnyamandapam (pandal of altar) followed by his two wives and priests who were entrusted with the duties of performing various rites over there.