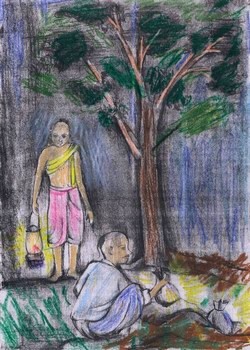 Once, Sri Martand Dixit and child Chidambar visited the house of a disciple in a nearby village called Hallihal. There lived a person called Shri. Ramchandra who was a devoted disciple of Sri Martand Dixit. He was pleased to see both in his village. He respected Shri Martand Dixit as his guru. He took both to his house and honored them with total dedication and love. He offered them good food with sweets as a token of his respects to them and gave good hospitality throughout their stay at his place. Sri Martand Dixit and Chidambara were requested to stay in his house overnite as it was too late to return back to their native village.

Chidambara was in the habit of massaging his father Sri Martand Dixit’s feet until the latter went to sleep. This had become his voluntary routine. Here too, at Ramchandra’s house, child Chidambara began to massage his father’s feet. He kept on massaging his fathers feet little knowing that he had already gone into deep sleep. In the adjoining room, Ramchandra and his wife were worried and discussing about the theft of a box containing gold ornaments that had taken place in their house the previous night. His wife insisted Ramchandra to ask gurudeva Sri Martand Dixit about the culprit and help them retrieve the lost ornaments. Though Ramchandra had lost all his lifetime savings and ornaments in the theft, he reprimanded his wife against the idea since the gurudeva had come to their house for the first time and it would not be proper to ask him. He asked her not to worry and said that God was great and he would help them in some way or the other. Chidambara who was in the adjoining room overheard the discussion while massaging his father’s feet who had already gone into deep slumber.

After some time Chidambara came out of his room and called Ramachandra to show him a light as he wanted to go to latrine. Ramachandra came with a lantern and a water-jug in his hands. As Chidambara was little and new to the place, they both went out of the house together far from village. Ramchandra pointd out to a spot in thaat jungle and requested Chidambara to ease himself. But Chidambar kept walking further out side the village. It was almost midnight and they were still walking far way from the village. Ramchandra was a little bit perturbed and he could not understand what was going on. Finally he asked Chidambara, "I can not understand where are you going and taking me? ". Child Chidambara answered, "come with me". He showed a tree nearby, and asked Ramchandra to dig at a particular place beneath the tree. Ramchandra was confused. Chidambara said,"Come on. Start digging". Ramachandra started digging at the place shown. To his utter surprise, a box was uncovered from under the mud which he recognized immediately. It was the stolen box in which money and gold was kept. He took out the box and prostrated there at the feet of Chidambara. Then they both returned home.