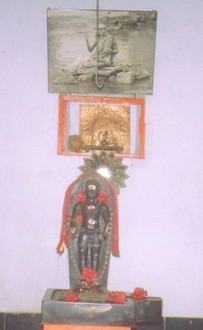 Child Chidambara kept growing gradually into a healthy, beautiful, divine being like a moon attracting everyone around him. People visited Sri Martand Dixit’s house particularly to see the child and the way he waved at everyone, kicked his legs in the cradle and beamed a bright smile to all. Everyone who visited the place was tempted to pick up the child in his arms after the first glimpse. But the mother, Laxmi mata, feared that some one might cast his evil eye on the little one. She took utmost care to see that the evil spell of some malevolent eyes be cleared through appropriate rites. Every moment with the child was a joyous moment and at every cry Laxmi mata would feed the little one with love and affection.

On the 31st day, Sau Laxmimata offered a cow's milk. In the third month the child was shown " the sun in the space ", in the 4th month the child was taken to the temple for the darshana. At the commencement of the 5th month the child slowly started sitting on the floor for the first time. When child was six months old, the child was adorned with gold ear-rings and in the 7th month, the parents performed annaprasana (it is a method to start feeding the child with rice, ghee and curds on auspicious day).

Slowly child Chidambar began to crawl. One day he slowly crossed the threshold of the house. It was the most joyous day for the parents. This created problems for the family as the child frequently kept leaving the house. The child also tried to handle fire, catch insects and kept creeping out of the house to eat the mud and pouring the mud and sand all over its body. Such acts of the child become a matter of concern for the parents. The following year they begot another male child (brother for Chidambar ) who was named as Prabhakara. Chidambara always liked to play with his friends. He forgot to take lunch while playing busily with his friends. His mother scolded the young Chidambara and shouted at him to take food at home. She had a bowl full of rice and ghee for him to eat. When maata Laxmi asked Chidambara to open his mouth to feed him, she was astounded to see the universe within his mouth and planets moving around. It was is like Yashodamaata who saw the whole universe in the mouth of Lord Shri krishna. Soon she remembered the avatara of Lord Shiva. And at the same time she felt sorry for the words of anger uttered by her while calling him for eating food.