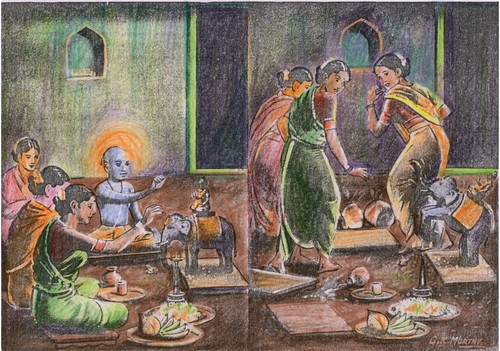 In a village named Hosur under Savadatti taluka in Belgaum district of Karnartaka, there lived a pious person called ‘Martandappa Kulkarni’. He was a disciple of Shri. Martand Dixit.

The puja commenced with Ganesh-pujan. (Worship of lord Ganapati which is to be carried out at the beginning of every religious ceremony as is the custom in Hindu tradition). Chidambara placed the idol of Gaja Gauri on throne and started prana-pratishthapana by chanting mantras. ( Prana – is LIFE – to be put in the deity by chanting mantras. This is known as Prana pratishthapana). As soon as the prana-pratishthapana was over, Gaja i.e. the elephant idol came to life and started moving its ears in response to the mantras chanted by the little Chidambara. Chidambara winked and gesticulated the elephant to keep quiet for a while. Child Chidambara performed the rest of the puja as usual, received Dakshina (consideration paid to him for performing the pooja) and went home.

Back at the venue of the pooja, the elephant which was made out of mud with life put into it by Chidambara, remained alive. The mere toy had now become a living being and started growing bigger and bigger and kept moving around. It started throwing puja articles helter skelter with its trunk. The ladies were terrified, while the other onlookers were in a daze.

A worried and terrified Martandappa Kulkarni rushed to Shri Dixit’s house frantically and told him the whole story. Sri. Dixit realized what had happened. He called his son Chidambara and asked him to go to Martandappa’s house to carry out uttar-puja (a ritual followed by main worshipping act) which he intentionally skipped while returning from the pooja. As per his fathers orders, Chidambara came to Hosur and performed uttar-puja. To everybody’s surprise, the huge elephant turned into a small lifeless mud toy once again as before.

The earthen toy-elephant got life by way of mantras and the same elephant was again turned into its original lifeless form only by mantras. The strength of God was exhibited since child hood by little Chidambara. People's misconceptions and guesses about his authority on religious and spiritual matters were proved wrog by that incredible act. Everyone in the house as well as the villagers who witnessed this event, were surprised. They bowed in reverence before Chidambara and asked him to pardon them(particularly the ladies who had teased little Chidambar). The room where the pooja was performed is still in existence and now Mr. Malhari Kulkarni and Mr. Dattatraya Kulkarni stay there.