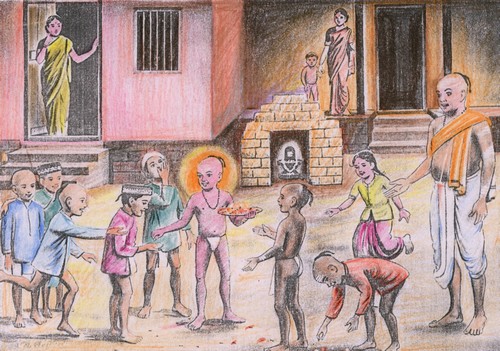 During his childhood, Chidambara used to play with his friends. Once he built up a mud temple for Lord Shiva. After its completion, he installed a stone image inside the temple and invoked the spirit of Lord Shiva. When he started performing the holy act of worshipping (pooja), by expressing a mere wishing he got all the things needed for his ritual. This surprised his friends who were witness to that incredible occurrence. after some moments he took a large quantity of sand on a big leaf and offered to Lord Shiva it as naivaidyam (sacred food). After finishing the holy act of owrshipping Chidambara distributed the same sand as prasada (blessed food) to everybody present there. To the surprise of all, the sand was transformed into bright and sweet crystals of sugar. It tasted sweeter than usual one. The children who were present at the event, narrated that wonderful experience to their parents and other friends also.

This news spread throughout Muragod and many people come to see the Child Chidambara playing with his friends. Some prostrated from a distance and some made namaskara (salute) in their mind. Some just glanced casually. Gradually the news reached Shri Martand Dixit. One night when child Chidambar reached home after play, Shri Martand Dixit called Chidambara in his room and sighed " Oh Chidambara I request you to not to show your divinity now itself , otherwise you will deprieve us of your company. I will tell you the right time to behave as per your wish. I know you are Lord incarnate but till the time comes please keep quiet and be a good child of good parents". Chidambara understood the sensitivity and feelings of his father and responded positively and ran away at once. It was as if all the four stages (avasthas) such as jagruti (Conscience), swapna (Dream), sushupti and turya in his spiritual voyage towards canonization became self evident before Martanda Dikshit.

Mean while after the second son Prabhakar, Martand Dixit's wife delivered a daughter and she was named as Sheshakka.